Working at home may not seem like you’re rocking much, but as I approach the last weeks of summer, I can say I’m proud that I haven’t worn long pants all season so far. Perhaps that’s not strange considering it’s generally warm in the Chicago area during the summer…or it just means I’m not going anywhere much.

My family’s summer vacation consisted mostly of shepherding two teens and one pre-teen back and forth to camp in Michigan, and the older teen to a summer college program in Ann Arbor. Michigan restaurants and coffee shops have been about as exciting as it gets for our family this season. (You should try Anna’s House if you’re in the Ann Arbor or Kalamazoo area.) My wife and I finally succumbed to Covid during this period after 29 months of the virus (gee, thanks variant BA.5), and so ll the more reason to hole up in shorts.

A few weeks before summer started, I started a new job. When I started my previous job in January 2019, working at home wasn’t even an option. Then Covid came along in March 2020, and we grew the company while completely in quarantine (except for the brave warehouse workers and ops team). I didn’t go back regularly until 2021, and by then two days a week were fine for all of us. I got used to the flexibility. With three kids, somebody typically has to pick up or drop off someone, and my wife and I try our hardest to split those duties.

If you’re of a certain age, you can remember a time when working from home was never an option. I once had a boss, right here in the 21st century believe it or not, who went ballistic to his direct reports in a management team meeting about allowing employees to work from home, and I was told “the worst offender is on your team, Lee!” It just so happened that A) the offender on my team was not the worst in the organization–she was a first-time mom just a month or two after her delivery, and B) the worst offender was actually on another team. She was a course developer who told me she did her best work in the bathtub. I didn’t respond to that comment, nor did I respond to my boss, because I don’t believe in throwing people under the bus or into the bathtub.

I’m now all in on working from home, and I’d never work for an organization that demands I come in more than once or twice a week. I’ve gotten used to accomplishing more while away from an office, even with the distractions of home life. During the pandemic I got a steal on a wooden Leopold desk from the 1950s with all sorts of hidden compartments and a hydraulic riser that springs out of a left cabinet. 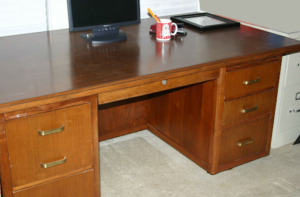 This is your father’s desk…if your father worked in a bank in the 1950s. There are so many hiding places in it, your father could have robbed the bank too. 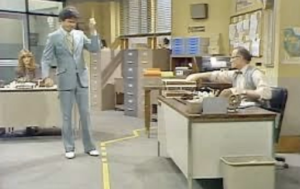 I know: as God is your witness, you thought turkeys could fly

The size and weight of the desk required hiring two guys from TaskRabbit, because the looks of it gave me a hernia without lifting a finger. It’s so grand, I feel like it’s my very own Resolute Desk, even though the office is not oval and I’m not president of anything—not even co-president of our house. In fact, the office is a tandem room that I share with our youngest, and on good days it’s shared half-and-half. Sometimes the Playmobils on her half bleed over to my half. I’ve thought about putting tape on the floor like Les Nessman on WKRP in Cincinnati.

Zoom requires setting up your space too. The tandem room was an add-on on the back of our house, and it has an angled roof on one side. I sometimes wonder if I present to others like I’m in a villain’s lair on the old Batman TV show with Cesar Romero as the joker. So I’ve alternately used backgrounds of the Chicago Skyline, Wrigley Field, the original Starship Enterprise bridge, the Next Generation Enterprise bridge, and (like so many colleagues) one of the thousands of images from the “pristine office space or home that looks better than what’s actually behind me” collection. Bonus points if you have a body of water in that fake background. 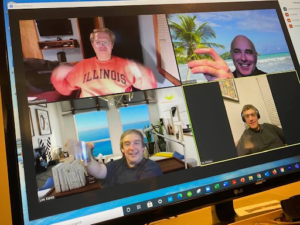 After-work “seaside” get-together with friends. Sing it with me, REM fans! That’s me in the (bottom left) corner. That’s me in the Spot. Light. Drinking a Balvenie. Trying to Convince. You. I live near an ocean. And I don’t know if I can do it…

After 3 months on the new job, I’m still amazed that I’m helping to build a company with a whole bunch of people that I’ve never been in a room with. One of them lived 40 minutes from me, and we talked about meeting for coffee, but then she moved to Florida. A few of my co-workers have moved in the time since I’ve started, and one described herself as a nomad. I could confirm, as her backgrounds were always real and always different.

As I write now, the kids have all gone back to school, and so the house and my half-office are quiet. A meeting has ended, and it’s lunchtime. Before I head to the kitchen to throw something together, I pull out the slide shelf on the upper right of my Leopold, put my feet up on it, and breathe in and out for a minute. This may still be working, but it’s easier living. I suppose that’s a combination that most of us would be happy with, and I’m grateful for everything that comes with it, including shorts all summer long.