We humans love to waste. Most of us know there’s a human impact on climate change, and yet our human behaviors betray any efforts to turn our society around on a better path to save our environment.

Even if we drive hybrid or electric cars, even if we recycle, even if we water our lawns half as much as we used to, the counter-examples still outweigh these niceties by probably a million to one. We continue to use plastic for just about everything–water bottles, food containers, utensils, K-Cups, phone cases–while there’s a Texas-size amalgamation of plastic floating around the ocean. We still buy meat like it’s running out of style, despite the fact that methane from cow farts are contributing to the environmental crisis. And we still use way too much paper without recycling.

Whenever I’m in a public bathroom with paper towels, I want to write down the phone number of the paper dispenser manufacturer so I can give them the what-for. These dispensers appear designed to guilt me about how I’m contributing to the planet’s destruction. I pull down one small piece of paper only to realize: that’s not enough, so I need a second. Feeling like one more should be enough, I pull down the second sheet, only to find that it’s still not enough–my hands are still wet. So I slowly lift my hand to the dispenser, pull down the third sheet, and…great: I’m now destroying the Amazon rainforest, so I should just go in a corner and cry. How about two slightly larger sheets that are big enough without requiring a third? Can you help out a wet-handed brother, executives at Tork? 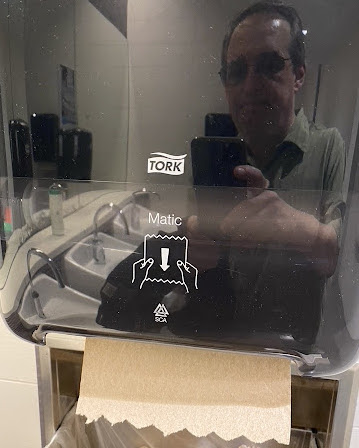 But nowhere is this waste so obvious to me as when I shop for toilet paper. I wonder whether the toilet paper aisle is where Dave Matthews came up with the idea of his song, “Too Much.” In short, there are too many plies in this world.

When I was growing up, the word “ply” was typically a verb. You could ply a trade or ply a tool like a needle when you’re sewing. It’s why we have the word “pliers” for that particular tool. But as I’ve grown, it seems “ply” has morphed into more of a noun referring to layers of things, from wood to cardboard to sheets. And nowhere is it used more than in the sale of toilet paper.

Like everything else in our conspicuously consumptive lives, why have only one ply when you could have so many more? One ply is, like, so 20th century, and they recall a quaint and innocent time when we were young, naive and less thick. My parents used to buy individually wrapped Scott rolls of toilet paper in blue, white or pink colors–they weren’t even multi-packs then. Ah yes, the simple times before the multi-ply, when we were naive to think that multi-plies could not multi-ply any further.

Next time you’re shopping, ply yourself a bit by walking down your TP aisle or surfing Instacart in search of a container of toilet paper that has less than FOUR PLIES. Four seems to be about the average these days. Our plies are out of control! You could even buy a 12-pack of 100-ply toilet paper for $200, which sounds a bit like TP fit for a king or queen. Their ad campaign should somehow involve the words “Royal Flush.”

I know what some of you are feeling: a little extra padding down there gets the job done faster, and a little more softness is better than a little more sandpapery. I get it…but it’s missing the point. It might be faster and more comfortable, but do you really think you use less four-ply TP than you use two-ply to get the same job done?

Here’s a simple a/b t/p test. Next time you’re stocking up at Costco, Jewel, or Affluent Toilet Paper, buy two six-packs of different plies: a two and a four, a four and a six, or a six and a twenty-four, for example. Then mark the day and time you start one pack and finish it, then the day and time you start the other pack and finish it, and see if the extra plies add any degree of speed or efficiency. (Obviously we could argue there are other variables impacting this test, such as how you ate of things that disagree with you, but these things average out over time, so we shouldn’t give two shits about them.) I’d bet a carton of TP that you’ll run through the different ply packs in about the same time. (But if I lose, I’m buying you recyclable TP from Who Gives a Crap.)

I’m convinced, as with so much in our society, these extra plies are an example of us humans being hoodwinked into thinking we need more of something when we could probably get by with less. And some of us humans work for toilet paper companies or their advertising agencies who have hoodwinked us into this thinking. It’s called greed. It’s a ruse. We need to open our eyes and guard ourselves against the TP Industrial Complex.

I’m not suggesting we go back to the days of buying single rolls of Scott paper. (I see people in the store sometimes buying just one or two rolls, and I think either they are going on the shortest camping trip ever or they are privy to some secret knowledge about the soon-impending end of the universe.) But surely two plies are enough these days…or one ply if you can find it. You can probably find it in a four- or six-pack, but not one of those 100-roll monstrosity-packs that you can find at Costco–the ones requiring a UHaul trailer to bring home and a separate TP closet to store, if you’re into hoarding. (News flash: we escaped the first few weeks of the pandemic and its TP shortage scares just fine.)

I know I’m not alone in this feeling. The top-listed toilet papers in Good Housekeeping‘s Best Toilet Paper of 2022 all start with TWO PLIES. Of course that article was strangely written in 2020. What psychic toilet paper powers do you have, Lexie Sachs? What is the future of TP like in your world? 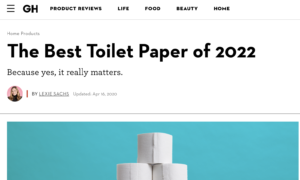 Better yet, we can try these new grown-up wet wipes, as I’m sure they get the job done best of all, though I’ve never tried them. With three older kids, it’s just an experience I don’t need to relive, even when they have kids.

OK, enough on this topic. I now wash my hands of it. Case closed, along with the toilet seat. (I live with three females, after all.) We’ve saved the environment in one short blog post. Now let’s spray some aerosol to re-scent the air. What harm could that do?